Beckham Bum is a Talisman. Ahh, we love us our superstitious footballers particularly these guys who are fascinated with our David Beckham’s bum. What’s the deal with these dudes? If that’s how they behave in public, can you imagine what they are doing in the privacy of their locker room. Haha.

Anyways, you pervert reader, this is reportedly just his teammates’ manner of expressing their congratulations to our David for scoring a goal.

Dailymail: The 33-year-old football ace was seen getting groped by his AC Milan team-mates, Andrea Pirlo and Clarance Seedorf during the Serie A stars game against Bologna at the Renato Dall’Ara stadium.

But it wasn’t just a case of cheeky behaviour, the pair were congratulating midfielder Beckham – and also touching him for luck after he scored his first goal for the club he is on loan to for three months. 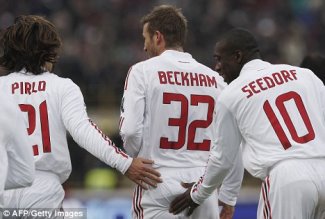 An AC Milan insider said: ‘Everyone knows Beckham has a golden touch and he has proved that since he arrived.

‘Italy is a superstitious country and people often touch things for luck – the players are doing the same with Beckham and touching his bottom because he is seen as a lucky mascot.’

Okay. So apparently, they are not caressing the famous Beckham bum merely because they like it? Yeah, right!

Remember that controversy about David Beckham’s teammates caressing his bum? Turns out that he likes it. Yeah. He likes it. Really, really likes it. And David would like his team mates to continue smacking his bum.

Here’s our David talking about the special attention that his bum is getting from his fellow AC Milan team mates:

“We laughed and shared a joke about it among the squad. I hadn’t even realised Clarence had touched my backside but I’ll be happy if he does it again — because it will mean I’ve scored another goal. So he’s formally got my permission to touch it again.”

As we noted in earlier post, this weird public spanking is the Italian way of saying “Good job” and “Good luck”. 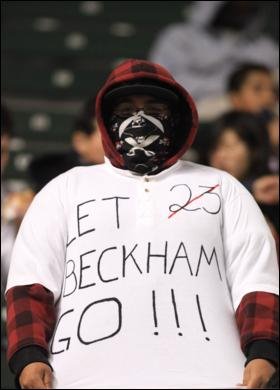 Ouch. Seems like them Galaxy fans are not amused with David Beckham’s attempts to move to Milan. Either they are staying away from his games or are actively urging the management to let him go. 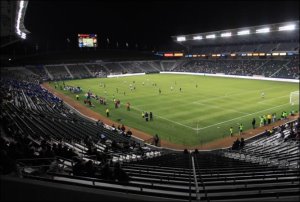 This is going to be a nasty divorce and a public relations headache for Beckham. Still, Becks can always console himself with the thought that the Milanese love his world famous Beckham bum.