Barack Obama Underwear on the Netz. So as some of you already know, this post is originally about Quentin Fournier’s painting of Barack Obama in his briefs underwear. However, as the President winds down his last days in the White House, we decided to do this update to roundup the Barack Obama underwear stories we encountered in the internets.

Of course, when it comes to famous men like Barack, one of the most important question they’re asked goes “boxers or briefs”. When US Weekly asked this question, our Barack had this to say: “I don’t answer those humiliating questions. But whichever one it is, I look good in ‘em!”

The President was very popular when he assumed office — he’s still popular now, by the way — so it’s not surprising that some underwear makers added some Barack Obama underwear in their merchandise offerings. For instance, underwear designer Andrew Christian came up with Obama boxer briefs back in 08 (right). Likewise, some custom undies maker like cafepress.com offered Barack undies.  Lastly, this American in Senegal found some Barack Obama underwear being sold at a local market.

Now, what’s the President’s preference when it comes to brands? Apparently, he sticks to one brand and only one. This is what he told Jerry Seinfeld anyway when he joined the comic in Comedians in Cars Getting Coffee. Here’s the direct quote from the Prez: “You gotta go with one brand. This is a critical concept.”

So maybe prefers Calvin Kleins and wears only CKs? Or probably he only wears good old Fruit of the Looms. Whatever his brand preference, we do know that the POTUS — at one point — wore some undies from David Beckham’s underwear line. Why do we know this? Because the Becks sent the President 50 pairs of underwear. ABC News gives us the details:

Soccer superstar David Beckham reportedly gifted the president 50 pairs of fitted boxer briefs from his own H&M line, making good on a promise to send Obama a “big box of underwear” that the LA Galaxy star mentioned back in May.

The president and the British midfielder got buddy-buddy in May, when the LA Galaxy was invited to the White House after winning the Major League Soccer Cup. Obama ribbed Beckham for being both a soccer star and an underwear model.

“He is tough,” the president said of Beckham. “In fact, it is a rare man who can be that tough on the field and also have his own line of underwear. David Beckham is that man.”

After the good-natured jab, Beckham told EXTRA in an interview that he was going to send Obama “a big box of underwear” as thanks for giving his products the presidential seal of approval. “To be in the White House was huge, I think, for myself. And to be given a little bit of a stick by the president was even bigger,” Beckham said.

Barack Obama Underwear Photoshops. Critics and fans of the Prez love to photoshop him in his undies. Let’s check out some of their outputs shall we?

Pick a favorite photoshop! Our choice is the one where he’s wearing tighty whities while a sad Romney is wearing his Mormon underwear. 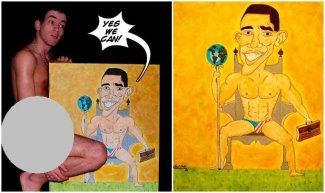 Hey look, an Obama fan (we assume he is an Obama fan) has painted a portrait of President Obama as an underwear model. Look out Gov. Arnold Schwarzenegger, you’ve got tough competition in the “Best Politician Underwear” department.

The artist’s name, seen here canoodling (not sure if this is the right word, hehe) his Obama painting is Quentin Fournier.

By the way, do you think Quentin crossed the line of “propriety”? Is this “fandomhood” gone amok or is it classy art?