Barack Obama Jeans: Mom Jeans Are Cool For Guys Too! Can older guys wear jeans? Well, if Billy Bob Thorton and U.S. President Barack Obama can wear them, we don’t see why not. 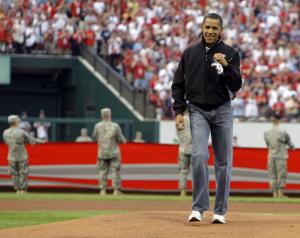 There is nothing wrong with a guy wearing mom jeans if he can still throw a baseball. Right? He’s got the moves! 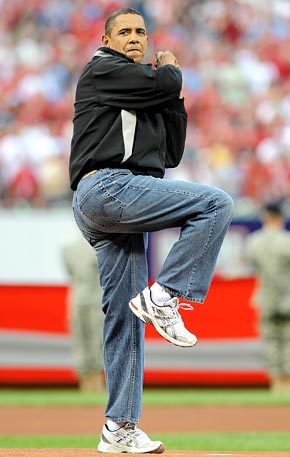 Oh, and we must say that we don’t get the controversy about the President Barack Obama jeans. It doesn’t look bad on him. And its not like he wore a skinny tight jeans that’s more suited for Zac Efron or a pair of ripped jeans that young men wear. So come on people, give the President a break. 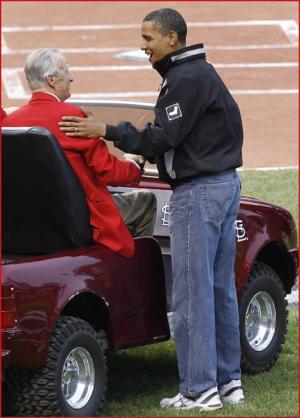 So says you can’t bike around in your jeans? Certainly not our President! 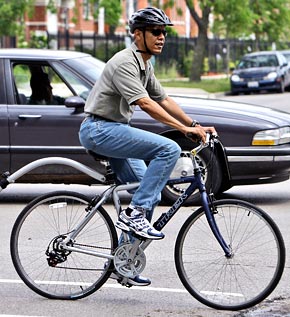 The Obamas went to St. John’s Church for the Easter Sunday mass. Expect the ridiculous Fox “News” people to find something wrong about it.

Shimon Peres on Obama: Elected by Americans, Chosen by the World
01 February 2009

Israeli Shimon Peres has a positive take on U.S. President Barack Obama: “Obama was elected by the Americans, but he was chosen by the rest of the world.”

As bloggers for peace, we really hope that Middle East situation will move positively forward.

If he accepts the White Sox invitation, President Barack Obama will be throwing out his first ceremonial pitch as president on April 6. That would be something to look forward to.

Chicago Tribune: In a letter dated Jan. 21, the day after the inauguration, Chairman Jerry Reinsdorf asked the team’s No. 1 fan to test his left arm before the White Sox play the Royals.

Obama has yet to respond but has plenty of time to make the final decision. Obama is an unabashed White Sox fan and threw a ceremonial first pitch during the 2005 playoffs.

Now, which NBA team will succeed in inviting the President to play for them? It should be the Chicago Bulls, eh?