Bald Male Models: Runway, Adverts, Editorials. This post on models who are friends of Yul Brynner has proven to be pretty popular so we decided to do an update to give you more that you thirsty Famewatchers are interested in. However, this post also kind of caught the eye of our censorious Grandma Akita so we decided to crop the naughty bits. Hehe.

Let’s begin with the guy who wowed the world a few years back when the internet discovered his mugshot and dubbed him the “hot felon”. We are referring of course to Jeremy Meeks who, after spending some time in prison, became a successful male model. Check him out on the runway walking for Phillip Plein. 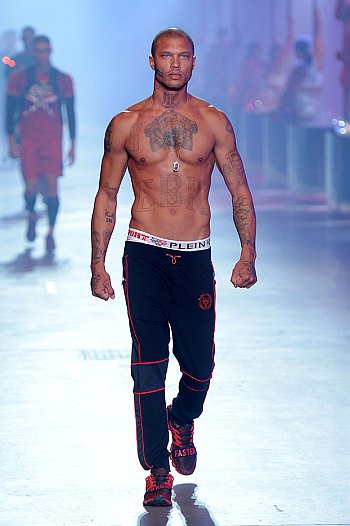 Another male model but, unfortunately, we have not been able to ID him even after 3o minutes of googling. 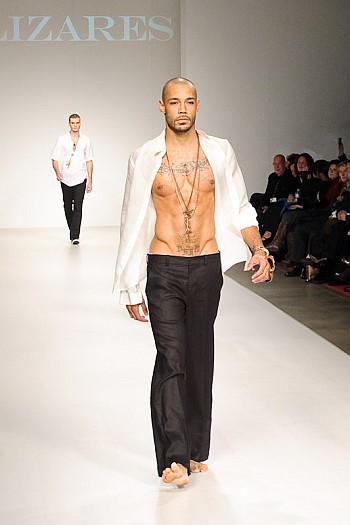 Modeling is more of a side-gig for Kelly Slater aka the greatest surfer of all time but he would have given full-time models a run for their money. Check him out posing with his surf board for a Telegraph Men’s Style editorial. 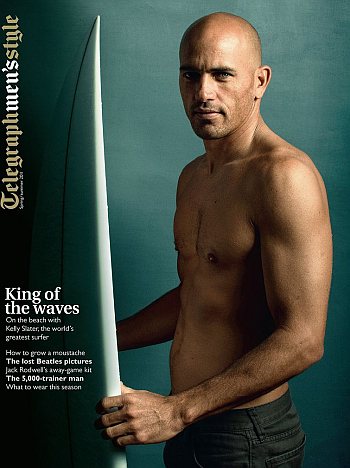 And here’s Kelly headlining an advertisement for FCS K-3 fins. 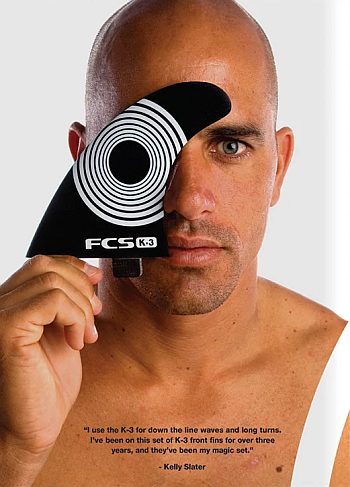 Even though we mentioned him below, we can’t get enough of our first imaginary bald boyfriend so here’s another photo of retired footballer turned supermodel Fredrik Ljungberg. 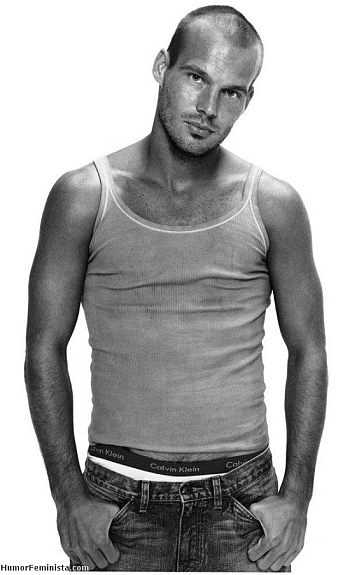 We should have included Tyson Beckford below but we decided to do an entire separate blog entry for him instead. But some of you might not have seen our post about him so we decided to include this image where he headlines an advert for Polo Ralph Lauren underwear. 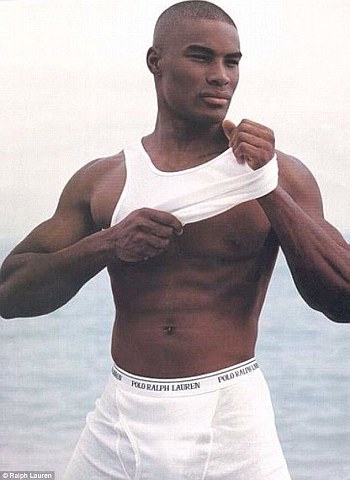 Our last but certainly not the least addition to this post is Todd Sanfield who actually designed his own swimwear and underwear line which he also models. And he’s a pharmacist to boot. Ain’t that the embodiment of a Renaissance Man? We think so!!! 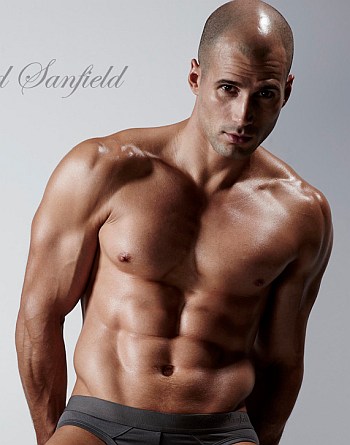 Bald Male Models, Actors, and Athletes (Posted 30 June 2013). There is no need to convince us here at Famewatcher that bald men are hot but did you know that a 2012 study by Albert Mannes at the University of Pennsylvania’s Wharton School of Business arrived at the conclusion that bald men are “are perceived to be more dominant, more athletic and better leaders.”

More from cbc.ca: “Two of the experiments showed that shaved men were perceived as being as much as an inch taller, on average, and stronger: the survey showed shaved men were estimated to be able to bench press 13 per cent more, on average. In all three, they were also perceived to have better leadership qualities.

This study should be music to the ears of the following bald male models, athletes, and actors which we are gonna list today. Let’s focus first on bald male models and first up in our list is this beautiful random guy whose name we still do not know. If you know who he is, do identify him in the comments. Ain’t he hawt, hawt, hawt? 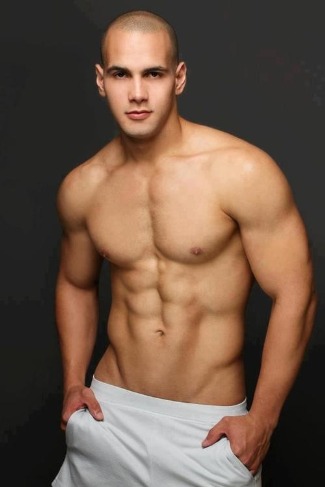 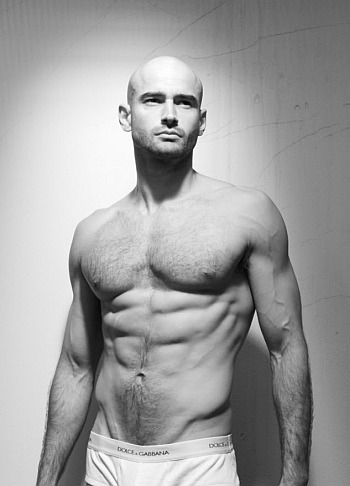 Christian Monzon on the runway. He may be bald in the head but he’s got some body hair which ups his appeal particularly for our friend Deena who has a weakness for bald men with hairy chests. By the way, we must note that Christian is also an actor who has several movie/TV credits to his name. 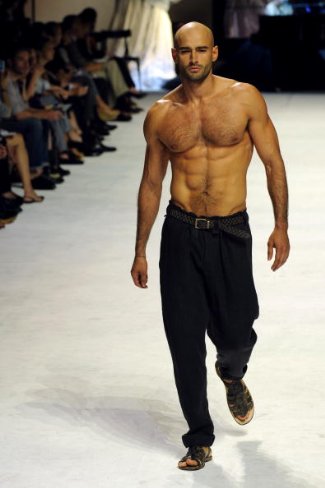 Our third bald male model is no stranger to those of you who watch international football: Swedish football hunk Fredrik Ljungberg. He is a very accomplished footballer who did/does some modeling gigs for top brands such as Calvin Klein, Nike, Procter & Gamble, L’Oreal, Puma, ESPN and Pepsi. You can see more of him in an earlier blog post: Fredrik Ljungberg Underwear Model. 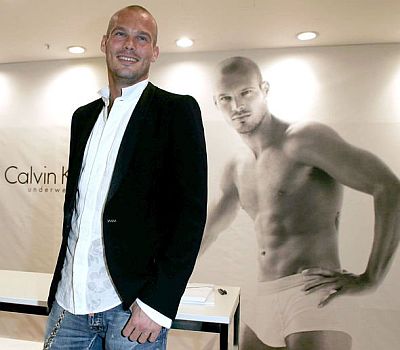 Our next model who rule the runway is Filipino model Paolo Roldan. Check him out in his skimpy briefs during the recent Philippine Fashion Week. 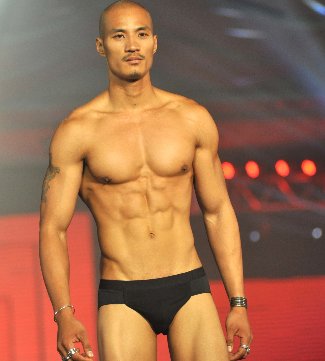 If there is a wet shirt contest for male models, British hunk Tristan Temple will surely make it to the Top Ten. Wowza! How hawt is he? 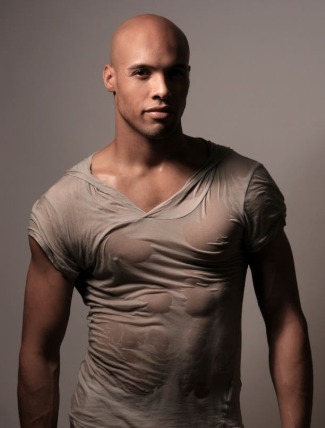 Don’t get your hopes up girls, Tristan is gay. But gays shouldn’t get their hopes up either because Tristan is very much married to a Serbian guy named Petar Perovic who was a housemate in Serbia Big Brother. 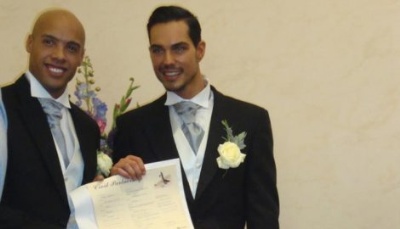 Last but not the least in our group of bald male models is Latino cutie Juan David Echeverri. We’re told he is from Colombia. Would you know if he is also a mixed martial arts (MMA) fighter? 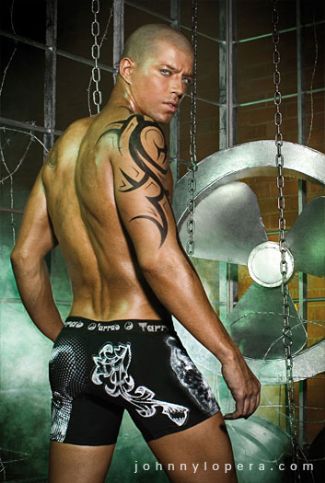