Bachar Houli Shirtless, Girlfriend or Wife, Rugby Hunk. Hmmm, when was the last time we blogged about rugby hunks? Apparently, it’s been four months ago. Hmmm. That’s not to long ago, no? However, we know that the more we blog about rugby players, the happier you, our fellow Famewatchers, will be so here’s Australian rules rugby player Bachar Houli shirtless on the pitch. 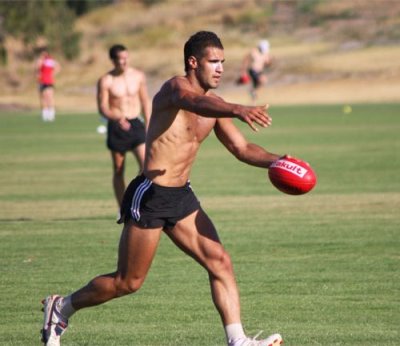 Want another one? Of course you do! 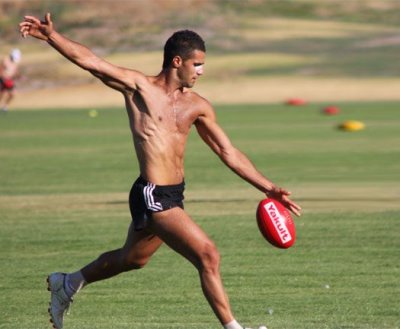 For those of you not familiar with Bachar, he is a midfielder/defender who currently plays for the Richmond Football Club of the Australian Football League. Prior to joining Richmond FC, he played for Essendon FC which drafted him in 2007.

Bachar is of Lebanese descent and, according to wikipedia, is the second devout Muslim to play in the AFL. In an interview with the Herald Sun back in 2011, here’s what our rugby hunk says about being a model for his community:

I’m grateful for the position I’ve been put in. I’ve got a role to play and that is to educate others about the way I live and the belief system I follow. It’s all about being proud of who you are and talking about it because a lot of people don’t understand and it’s about educating them that I’ve got a couple of different ways I go about life.

In turn, the Muslim community in Australia has embraced Bachar and was proud of him when the Richmond Tigers won the AFL premiership crown this year.

Says Neil Aykan, the executive director of the Islamic Council of Victoria, of Bachar’s achievements in Aussie rules football:

He’s a great ambassador for multiculturalism and diversity in Aussie rules, and also a favourite son of the Muslim community. I think he has done a lot of people, and not just Muslims, proud — to say that you could be the son of migrants, you could be a member of a CALD [culturally and linguistically diverse] community, a multicultural ambassador, and have the great honour in playing in this great sport of ours and actually helping your team win.

Bachar Houli Girlfriend? Nah. He does not have a girlfriend. But he does have a wife, Rouba Abou-Zeid. Here’s a photo of the happy couple. 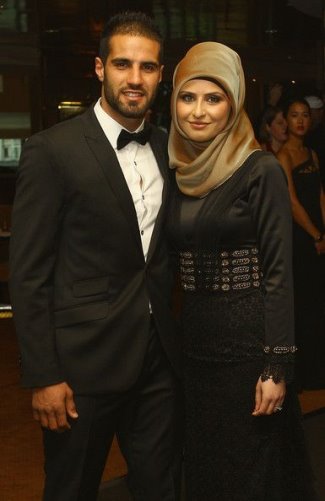 Let us end this post with our favorite Bachar photos: 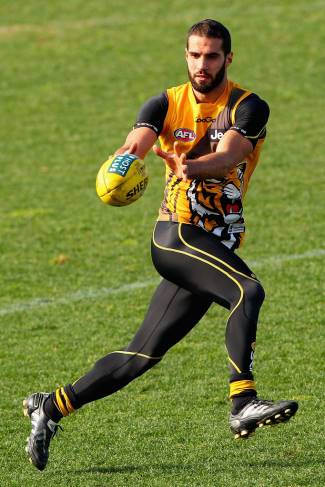