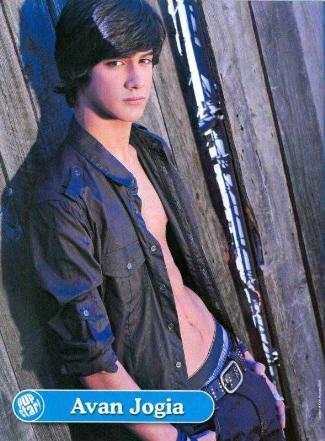 Because he is apparently one of the co-founders of Straight But Not Narrow, the organization of straight allies who are supportive of the causes of the LGBT community. 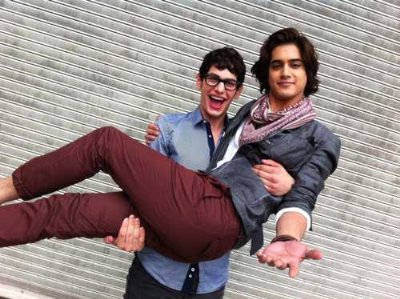 Avan tells us more about Straight But Not Narrow in an interview with After Elton:

AfterElton.com: Congratulations on a terrific project. How’d you get the idea and why?
Avan Jogia: In Canada, we have Pink Shirt Day. A kid had been bullied for wearing pink, people calling him gay. The next day, all his friends wore pink, and it really took off and became this thing in school called Pink Shirt Day. On that day, everyone now wears pink to show their support for equality.

So it comes from that and from my first role on television ever, a TV movie called A Girl Like Me: The Gwen Araujo Story, which is the story of a transgender girl, a terrible story of her being murdered, actually. I played her brother.

AE: It’s one thing to be supportive, it’s another thing to go public like you have and enlist your friends in a campaign. Why did you decide to do that?
AJ: At gay pride parades in Vancouver, “straight but not narrow” is a shirt that the straight guys and girls wear to show their support. And the name rang with me, right?

The people who are going to change the way people feel about these things are going be people in the public eye – I use the word “celebrity” selectively. The more straight guys speak out about it, the easier it’s going to be in schools. [My show] VICTORiOUS is seen by that age group. So it just made sense.

AE: Some might say that it’s risky for you to talk about this issue, which is, of course, exactly the problem. I think a lot of straight guys worry that if they take a stand like this, people will think they’re gay. How do you respond to that whole idea?
AJ: I think that anyone who thinks that somebody is gay because they care about equality and equal rights, that just proves our point even further. That’s exactly the problem, what you’re saying. It’s the worry that they’re going to be associated. But what’s the problem? Why is that [association] a problem?

I’m not going to shy away from my family values and my beliefs just because of something people might think. It’s very wrong [for anyone] to go against their own values because they think someone might judge them.

AE: Readers on our site sometimes say, “This actor must be gay because he played a gay role.” And I think to myself, “The truth is it’s not the closeted gay actors who are playing gay roles. It’s the straight ones who are secure in their sexuality.” The people who are freaking out about playing gay are the closet cases.
AJ: Yeah, there’s that argument. They protest too much. I don’t like to call people out or anything like that, but I always feel like if you’re protesting too much … yeah, you’re straight, we got it.

AE: I don’t necessarily think it means they’re gay, but I think it means they’re not very confident.
AJ: Exactly. They’re not confident in their own actions. Unfortunately, the main aggressors of gay youth are straight young males. It’s an unfortunate truth. What we want to do is make it so these males can react to the idea that someone is gay with … almost apathy. Like, “Cool. Okay.” That’s what we’re aiming for.

The project has gained the support of some of Avan Jogia’s celebrity pals like Cory Monteith (which we mentioned in our Cory Monteith Underwear post) and The Hunger Games star Josh Hutcherson.

Avan Jogia Shirtless Photos. Now because we here at Famewatcher are kinda shallow and because some of you are kind of shallow too, let’s end this post with a peekabo underwear photo of our favorite Canadian young star, shall we? 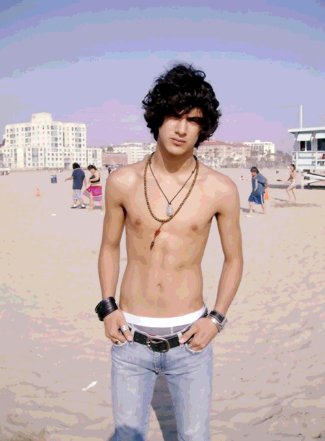 And another shirtless pic. Boy, he’s in great shape with them abs and all! 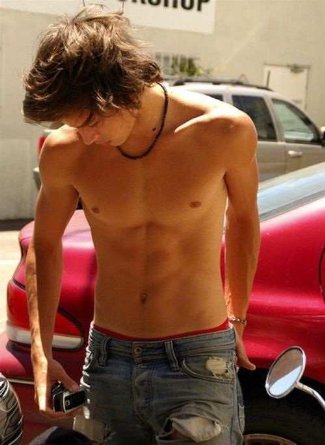 Avan Jogia shirtless in a tub with a guy and a girl. 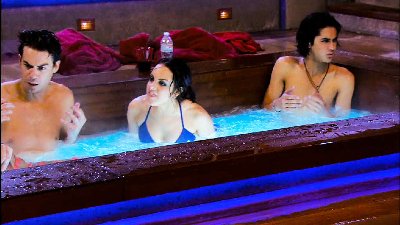 Question for those of you in the know: How does one pronounce Avan’s last name? If you know, please do tell us in the comments. Thank you. And thank you too to Avan for his support for the LGBT community.