August Alsina Shirtless, Underwear, Tattoos, and Fashion Style. Hollywood and the internets have been buzzing these past weeks about the tangled May-December love affair between August Alsina and Jada Pinkett Smith.

For those of you who’ve been living under a rock, here’s a very short description of the story: August and Jada had an affair while the latter was on a break with her husband Will Smith. The young man fell in love with the married lady who, it could be said, did not reciprocate the feeling as she eventually reconciled with her husband.

Heartbroken, August talked about his relationship with the actress during an interview while promoting his album. 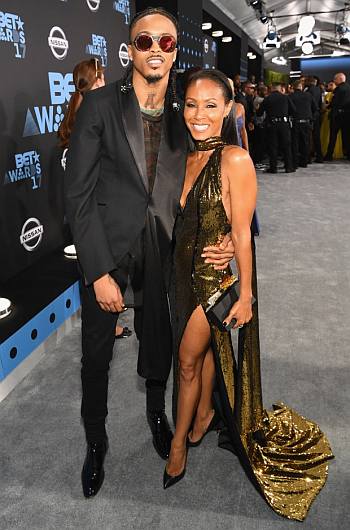 Initially, Jada — pictured above with August — denied that she bumped uglies with the singer but eventually admitted, during a conversation with her husband on her show Red Table Talk, that she indeed had an affair with August when she and her husband were on a break.

Now that you’re no longer clueless about this Hollywood affair, let’s take some time to know August more because he is the least known among the three people involved in this story.

He is an R&B and hiphop artist who won the Best New Artist at the 2014 BET Awards following the release of his album, Testimony, which peaked at #1 at the Billboard US Top R&B/Hip-Hop Albums. It was also certified gold in the U.S. by the RIAA or the Recording Industry Association of America. 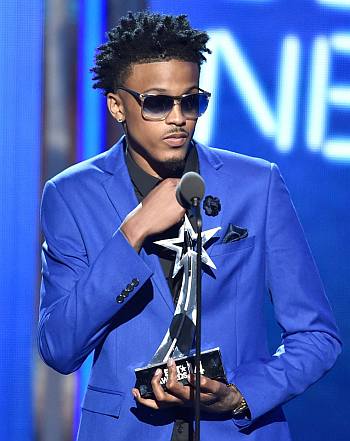 Looking fly as F on the red carpet.

August Alsina Family. He was essentially raised by a single mom as his dad and stepdad were battling addiction while he was growing up. They got estranged but reunited in 2017. His older brother was shot and killed killed in August 2010 and this propelled him to seriously pursue his passion for music by moving to Atlanta where his singing career took off.

August also has a sister who succumbed to cancer in December 2018. He is taking care of her two children and is now their legal guardian.

In an interview with ebony.com, here’s what he says of his role to his nieces and the importance of family: “They call me Damy — it’s dad and mommy mixed together. And just the weight of that title alone—because I don’t have kids of my own. It makes me want to be what I know I need to be for them because I grew up with my father dead and having a strained relationship with my mother. To go through life without having a person you can run to, without having a certain type of foundation, so I’m saying all of that to say I am how I am. And I am how I am until I get to more of what I’m supposed to be.”

August Alsina Tattoos. In an interview with Urban Ink Magazine, August had this to say about the meaning of his tattoos: “Women. [Laughs.] I’m still trying to understand these women right now to this day. I still don’t even understand my momma. I know I’m going to have a hard time. Right now, I’m at a place in my life where with relationships, it’s hard because you don’t know what they want from you. You don’t know what their motives are. That piece is Medusa. It’s a lust. What is it that you’re trying to give to me? It’s right there in the middle. I’m a fan of art so me and my tattoo artist were freestyling and it’s so cool because it’s right there on my chest, and when me and a girl and doing whatever we’re doing that allows her to be on top of me, she’ll look down at it and see. I’ll be like, ‘Yeah, bitch, I know your kind.'” [Laughs.]

Some shirtless photos of August which showcases his tattoos: 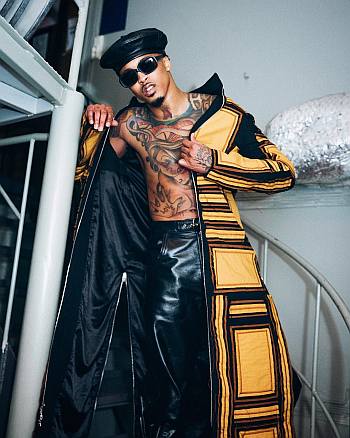 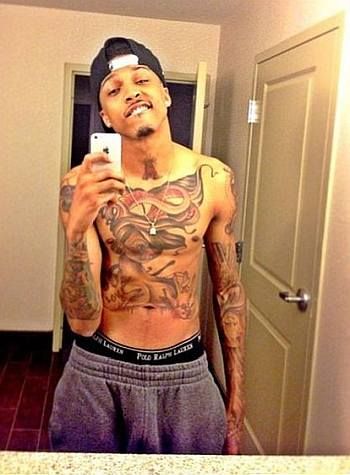 As you can see, he is a fan of Polo Ralph Lauren underwear. 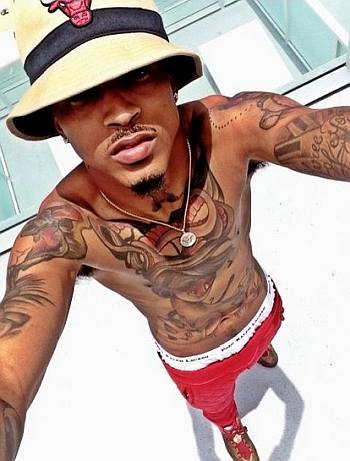 And, our favorite photo of them all, here’s August taking a selfie in his boxer briefs. 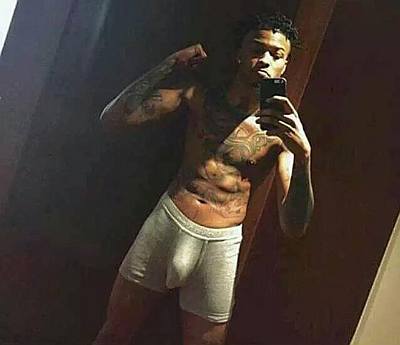 Originally from New Orleans, August began to seriously pursue his career following the death of his brother who was killed in