From Asian MMA fighters, let’s now check out some Asians in the NFL or the National Football League. Our list begins with:

1) Eugene Amano. Born in Manila, Philippines but raised in the U.S. since he was two months old, Eugene played for the Tennessee Titans from 2004 to 2013. He played primarily as an offensive lineman and as a guard. Amano has established the Amano Family Foundation which seeks to help inner city youth through football camps and which has provided donations to Philippine charities such as the Gawad Kalinga (similar to Habitat for Humanity).

2) Haruki Nakamura. Haruki was picked (6th round) by the Baltimore Ravens during the 2008 NFL draft. He played for the Ravens until 2011 and was subsequently signed by the Carolina Panthers in 2012 which released a year later following a concussion. Haruki may be the first footballer of Japanese heritage to play in the NFL. Check him out in his Baltimore Ravens practice uniform: 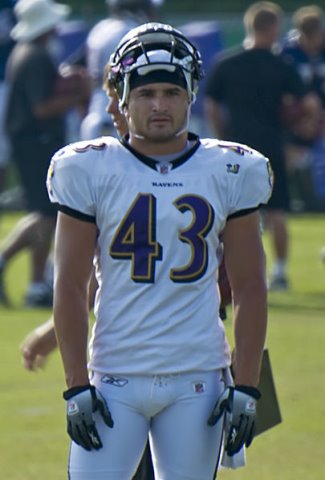 3) Kailee Wong. Born of a Chinese dad and a Hawaiian/European mom, Kailee was picked in the 2nd round (51st overall) by the Minnesota Vikings during the 1998 NFL draft. He played for the Vikings until 2001 and was signed by the Houston Texans a year later. He played for the Texans until his retirement in 2006. Here’s Kailee in his Texans uniform: 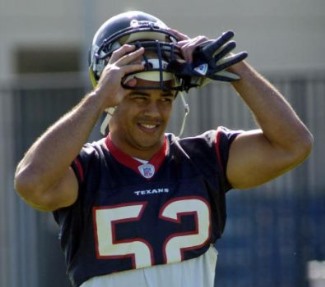 4) Dat Nguyen. Dat was picked by the Dallas Cowboys in the third round (85th overall) in the 1999 NFL draft. The Vietnamese-American linebacker played for the Cowboys until he retired in 2006 with a neck injury and knee problems. He retired to the Cowboys the following year to serve as an assistant coach, a position he held until 2010. 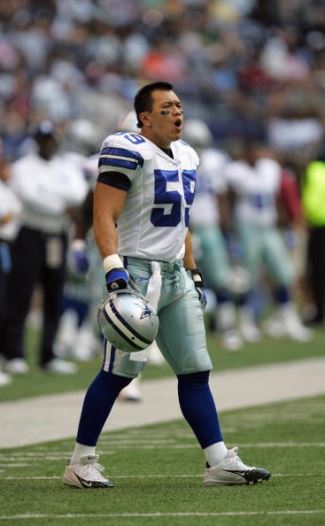 5) Doug Baldwin Jr, wide receiver for the Seattle Seahawks, is part Filipino courtesy of his grandmother who comes from Tacloban City. The place may sound familiar to you because the city made world headlines after it was devastated by Typhoon Haiyan in 2013. Doug expressed support to the Philippines (and Tacloban) by raising the Philippine flag during an NFL game. He and his team also raised funds for typhoon victims. 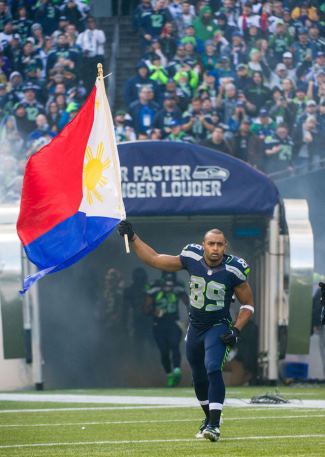 6) Arnold Morgado, Jr., running back for the Kansas City Chiefs from 1977 to 1980, is part Japanese through his Japanese American mother.

7) Hines Ward, wide receiver for the Pittsburgh Steelers from 1998 to 2011, was born in Korea to an African-American dad and a Korean mom.

9) Joseph Hauoli L. Wong was drafted by the Miami Dolphins in 1999. He also played for the Philadelphia Eagles (2001 off season).

11) Timmy Chang, quarterback, was signed but didn’t make the roster or didn’t play for the Arizona Cardinals, Detroit Lions, and Philadelphia Eagles.

13) Edward Kai Wang was drafted by the Buffalo Bills in 2010. He then signed with the Oakland Raiders (2012) and Philadelphia Eagles (2013) during the off-season or as a practice squad member.

14) Eugene Chung has the distinction as the second Asian American (after Roman Gabriel) to be drafted in the first round. He was picked 13th overall by the New England Patriots (1992–1994). Following his stint with the Patriots, this Korean American offensive lineman played for the Jacksonville Jaguars (1995) and the Indianapolis Colts (1997).

15) John Lee, placekicker, drafted by the St. Louis Cardinals in the second round (32nd overall) of the 1986 NFL draft. He is of Korean descent.

16) Neal Huynh was signed by the Atlanta Falcons during the 2013 pre-season. He is Vietnamese-American.

17) Chris Gocong, linebacker, was drafted by the Philadelphia Eagles in the third round (71st overall) of the 2006 NFL draft. He then played for the Cleveland Browns from 2010 to 2010. He is part-Filipino.

18) Steve Slaton, former running back for the Houston Texans (2008–2011) and Miami Dolphins (2011), is part-Filipino through his maternal grandma who hails from Manila. He was drafted in the third round (89th overall) during the 2008 NFL Draft. He now plays for the Toronto Argonauts. 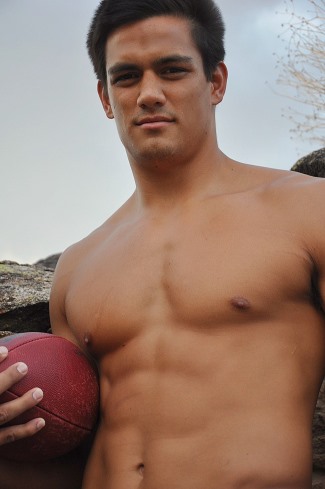 20) Tedy Bruschi, linebacker for the New England Patriots from 1996–2008, is part Filipino through through his mom who’s originally from the Philippines. 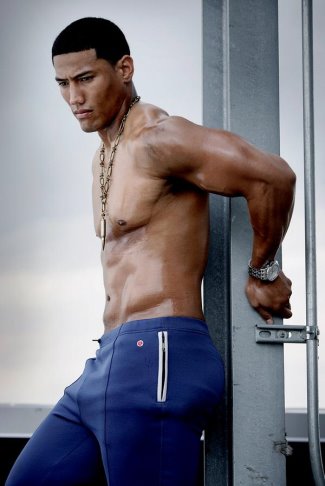 For the time being, we’ll leave you with the above shirtless photo of Will Demps which Deena insisted we upload. Haha. We plan to update this list once we come across more Asians in the NFL. If you know of some guys who should be in this list, do tell in the comments.