Arinze Kene Shirtless, Underwear, Girlfriend, Gay in Real Life? So, we were watching the funny horror comedy show Crackhead on Netflix and this guy appears and we’re like, “Whoa! Who’s that man who sizzles on the screen?” Of course, we gotta find out who he is and it turns out that his name is Arinze Kene. We also learned that he is a British actor of Nigerian descent. Most importantly, we discovered that he just starred in a movie about closeted footballers from which we got the following images. Yaay! 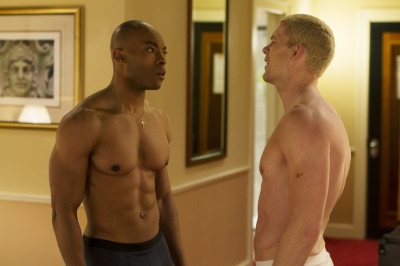 The gay movie is called The Pass which is getting buzz as an awards contender for the BAFTA. Here’s another photo of Arinze Kene shirtless with co-star Russell Tovey.

Arinze Kene Gay or Straight in Real Life? Now, Arinze’s co-star Russell Tovey has come out as a gay guy a few years ago (see Russell Tovey Boyfriend) what about Arinze? Is he gay or straight in real life? Well, he answers that question in an article from inews.co.uk:

I’m straight and to play a gay man, it’s just another character, it’s no different to playing a straight man. Two of my sisters are gay and understanding how difficult it can be to in some cases be seen as equal, it just made me want to do it… I believe that regardless of how the film is perceived it needs to happen because it chips away at that wall, and it will help to break down those barriers. In the same way that films before this have done.

By the way, we know Arinze is not gay because he committed the fashion scene of not matching his shoes with his whole ensemble. There’s something off with his brown shoes when paired with his black trousers. He should have called up Russell for advice. Now, these two look good together, don’t they? 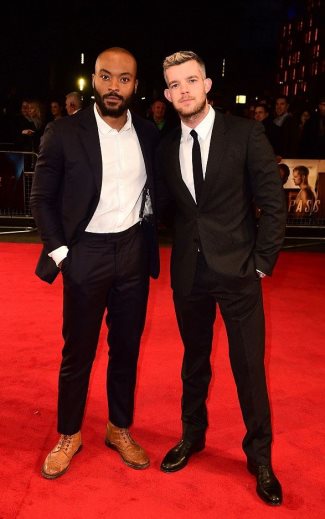 Arinze Kene Girlfriend? Single or Married? Is he dating anyone currently? Or has his heart been nabbed by someone else? If so, who is the lucky girl? We’re afraid we do not know Arinze’s relationship status. He did bring accessories designer Ugonna Hosten during the UK premiere of The Pass. Are they an item? Maybe they’re just close friends? Or maybe relatives? Well, we hope to update this section in the future when we find out more about Arinze’s relationship status. 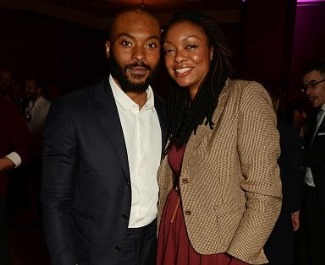 Arinze Kene Underwear: Boxers or Briefs? We do not know his underwear preference in real life but we do see him in boxer briefs in these images from The Pass.

They’re so happy. Good for you, gay footballers!!!

In conclusion, let us end this post with another Russell Tovey and Arinze Kene shirtless pic, shall we?

Update: The TV series we saw Arinze in on Netflix is called Crazyhead not Crackhead.