Andrew Wiggins Shirtless. BasketballWatchers, meet Andrew Wiggins, your #draft pick for the National Basketball Association (NBA) rookie class of 2014. Does he have the world’s best washboard abs or what? What kind of workout does he do in the gym to achieve this awesome eight-pack? 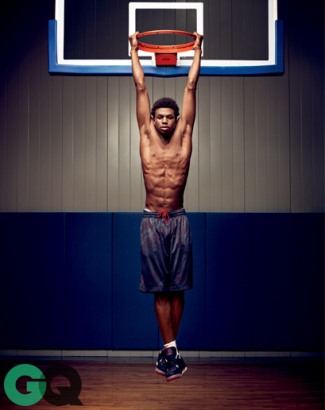 We’re guessing super-millions of abs crunches, cross-crunches, Spiderman plank crunches, cable rotations, bicycle crunches, and Swiss ball rollouts? Oh, and we must not forget that he must be eating healthy too. No amount of crunches will give you washboard abs a-la Andrew Wiggins shirtless if you eat lots after your gym visit. 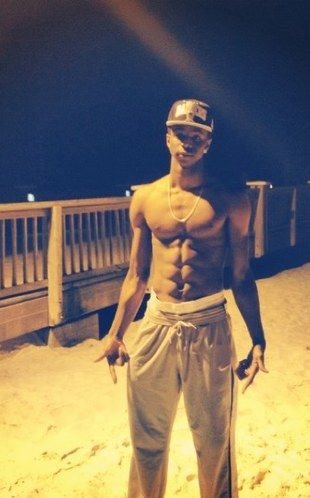 Want more ballers with no shirt? Check out these shirtless New York Knicks.

Andrew Wiggins Girlfriend. Does Andrew Wiggins have a girlfriend? You bet he does. Her name is Alex Reid. According to heavy.com, she’s an LA-based singer/songwriter who also models. She loves basketball so its no surprise that she found herself a basketball star for a boyfriend. Here’s Alex posing in a way that will make Tyra Banks proud. [Kevin says: I disagree. Tyra will rip her for that photo. She looks like she’s got big legs and feet which makes her unappealing.] 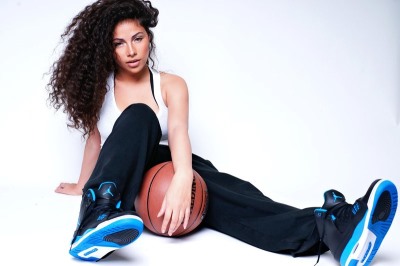 Young Andrew Higgins with Family. Curious to know what Andrew looks like as a young boy? Here’s a family photo from years back. 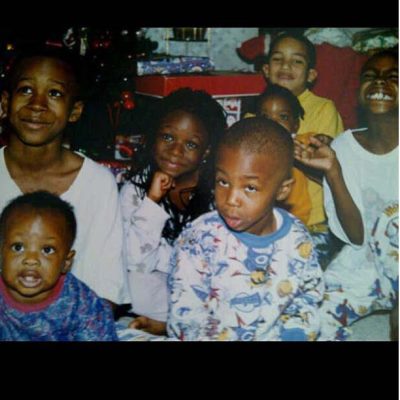 Andrew comes from a sporting family according to heavy.com:

If you take a look at Wiggins’ family tree, it is obvious where he gets his athleticism from. He was born in Ontario Canada to his father Mitchell Wiggins who played professionally in the NBA while his mother, Marita-Payne Wiggins was a two-time Olympian track and field sprinter.

His father is American and his mother is Canadian making him a dual citizen, however he has only represented Canada internationally.

Draft Reaction. How is the world reacting to Andrew being the #1 draftee and getting picked by the Cleveland Cavalier? Very positively. Here are some reactions:

Bleacher Report: The uber-athletic small forward from Kansas saw his stock fluctuate throughout his one collegiate season, but he finished exactly where he started—in the top spot.

The Cleveland Cavaliers have been leaving that small forward spot open for quite some time, all in the hopes that LeBron James might eventually come back to the team that originally drafted him, but it’s now filled by Andrew Wiggins and his interesting wardrobe choice.

And it’s the perfect choice.
…
Now, it’s a strong possibility that Wiggins could be playing more than 82 games during his rookie season. The playoffs are a realistic goal with him earning immediate playing time at the 3.

Matt Walks of The Oregonian:
When it came time for the first pick in the draft, Cleveland got it right by drafting Andrew Wiggins. He’ll make an immediate impact and contend for rookie of the year, assuming he stays healthy. Then, with the No. 33 pick, the Cavs took former Virginia wingman Joe Harris, a great perimeter shooter and a smart player. That alone would’ve been a good draft for talent-starved Cleveland, but the team added Dwight Powell via a cap trade with Charlotte in the second round as the perfect cherry on top.

That’s it for now, BasketballWatchers! Five cheers for Andrew Wiggins!!!!