Unless you’ve been living in some cave in Afghanistan, we’re pretty sure you’re aware that the young British actor is starring in the reboot of Spiderman so he’s been circling around the world doing press tours and red carpet appearances to promote his movie. He should give himself a pat in the back because The Amazing Spiderman is getting pretty good reviews and those who are giving it a negative review are mostly doing so not because the movie is bad per se but because, in their opinion, its too soon to be rebooting a franchise which was just rebooted 10 years ago.

Anyhoo, let’s get back to talking about what Andrew’s been wearing while promoting his biggest movie (which has the potential of making him into a big Hollywood movie star) around the world.

The photo below, taken during their Berlin photocall, is probably our favorite of Andrew’s outfits. He’s looking good in an Alexander McQueen Leather Baseball Jacket. 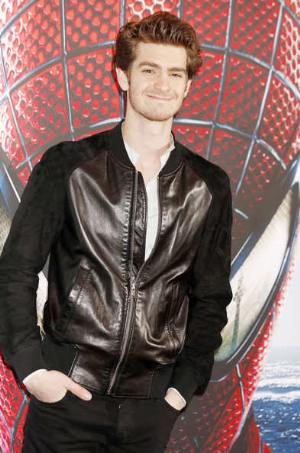 Speaking of leather jackets, what do you think of the Phillip Lim soft leather jacket he’s wearing below? Nice one but we like the Alexander McQueen better. 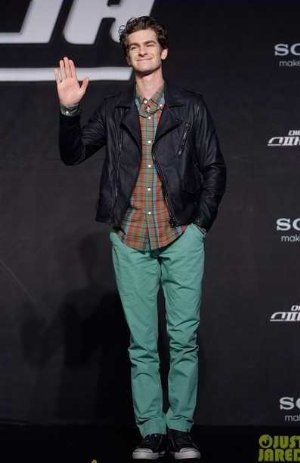 Andrew is one male celebrity who loves him his colors. Light greenish pants above and a red suit below from the Balenciaga Spring 2012 collection which he wore during the Paris premiere of The Amazing Spiderman. 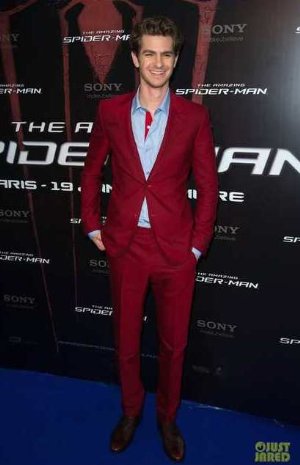 Another red carpet appearance, this time at the Seoul, South Korea premiere. 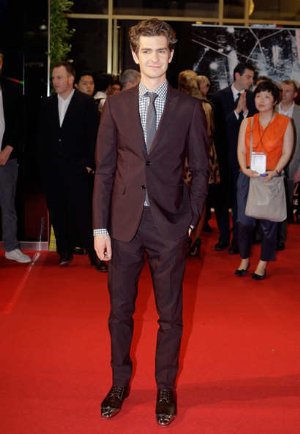 Andrew’s leading lady in The Amazing Spiderman is Emma Stone. One movie reviewer says they sizzle onscreen which is a big improvement from the Tobey Maguire-Kirsten Dunst pairing which is most criticized for the lack of chemistry between the two. Anyhoo, here’s Andrew and Emma at the recent Comic Con. He’s casual in a pair of J Brand Kane Jeans while she’s a bit more formal in a little black dress. 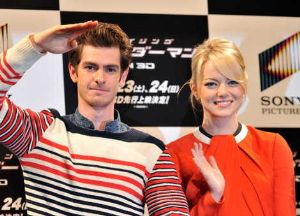 Our next favorite in this batch of photos, after the very first one above, is the last pic below taken during a photocall in Italy. 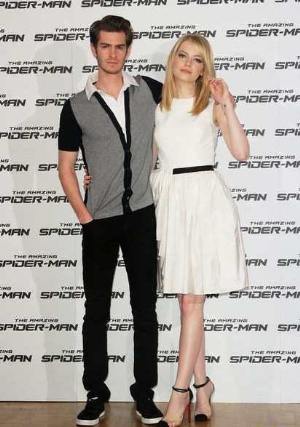 For more of Andrew’s fashion style, check out our earlier post on Celebrities Wearing Vests as well as this post on Shipley and Halmos Celebrity Suits.