AlignMed Posture Shirt Review: Feedback by Dwight Howard and Eric Gordon. Apparently, compression shirts are of different kinds. Some, like Equmen (see: Equmen Body Slimming Shirt) are intended to give you a slimmer look or hide the beer belly you gained from too much partying. Others, like AlignMed Posture Shirt (which we just discovered today) may look like the other compression shirts but it is classified by the American Medical Association as a medical device. Why, you ask? Because it apparently keeps you in the right posture and helps reduce fatigue.

NBA star Dwight Howard has worn one, so has Peyton Manning. Major league pitchers have worn them. NBA player Eric Gordon of the New Orleans Pelicans was wearing one last Monday when he returned from a 21-game layoff with a torn labrum.

It’s a “Posture Shirt,” made by a company called Alignmed, and its job is to help keep the wearer’s shoulders properly positioned, a key to reducing fatigue.

Errmmm. So do Peyton Manning, Dwight Howard, and Eric Gordon really wear Posture Shirts? We checked the internets for more information and we found this report from Lakers Nation essentially confirming that Dwight Howard does wear Posture Shirts. Apparently, the shirt helps limit the pain at his back and shoulders. More from said site:

The Posture Shirt had to be cleared by the NBA before Dwight used it during a game, but he has had positive results from it so far. The Posture shirt is designed to improve mobility, while maintaining balance in the back so he can absorb contact more naturally.

According to Mark Medina of the LA Daily News, Dwight had the following to say about the Posture Shirt’s results: “The Posture Shirt helps my back and keeps everything aligned,” he said. “It helps my shoulders with that, too. I wore the shirt a couple of times when I had some stingers. But I was able to play through it. The shirt was doing its job. It keeps everything in line. There’s nothing I can do about my back right now except to let it heal. That’s the only thing I can do.”

Ain’t if cool to hear Alignmed posture shirt reviews from users who actually use them? What about Eric Gordon, does he really wear said shirt? If he does, what does he think of the outfit’s reported health benefits?

Well, he does wear Alignmed as you can see him wearing a pair in the photo below: 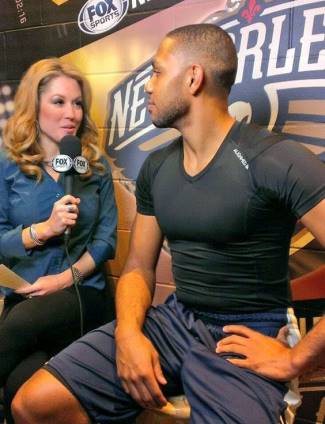 How would he review the shirt? While answering a question about his torn shoulder, he says something about how he hopes the Posture Shirt will prevent his injured shoulder from being jerked around. Via Fox Sports:

I’m determined to play through. That’s why I’m wearing the compression shirt. It will hold my posture in place and hopefully help keep my shoulder from getting jerked around.

So we can confirm that both Dwight Howard and Eric Gordon wear and use the posture shirt. What about Peyton Manning, can we make the same confirmation? Well, as of now, we cannot find any reputable/objective source that either shows Peyton Manning wearing said shirt or of him claiming that he does. This means that for the time being, let’s put his name in the “maybe he does or does not use Alignmed” category.

What we did find is this photo of Matt Hasselbeck wearing an Alignmed shirt: 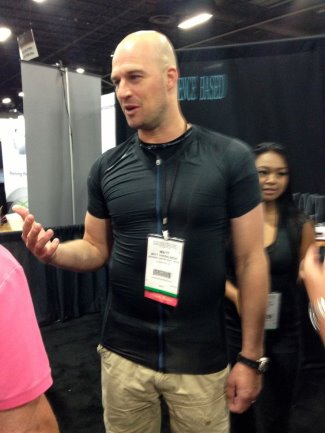 Unfortunately, we can’t find anything about what Matt says of the shirt and what it does for him. Maybe we’ll find an Alignmed review by Matt in the future. If we do, we sure will update this post to tell you what he thinks of the product.

That’s it for now fellow ShirtWatchers.