Alessio Sakara Underwear and Shirtless Photos: Italian MMA Fighter. You can’t get enough of sexy Italian men as well as mixed martial arts (MMA) fighters in their underwear? Well, here’s an Italian stallion and MMA fighter named Alessio Sakara doing his fighting pose in his undies. How cool is that? We’re hitting two birds with one stone, eh? 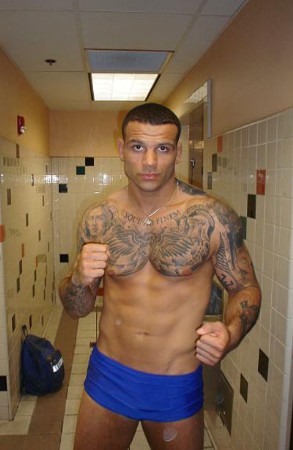 Anyone of you thinking of patting this Italian hunk’s behind? It will bring you luck. Hehe. 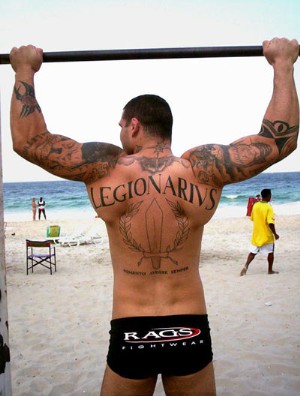 Whoa, nice tattoos you’ve got there, Mr. Alessio! For those of you who are wondering about what his tattoo Usque Ad Finem means in English, it means “to the very end”. According to answers.com, Usque Ad Finem is “often used in battles implying a willingness to keep fighting until you die”. That’s a nice badass motto for our sexy Italian fighting hunk, eh?

Alessio also has SPQR tattooed in his forearm. The initials mean ‘Senatus Populusque Romanus’ which translates to ‘For the Senate and the People of Rome’. Apparently, in the old days, Roman soldiers had SPQR tattoos.

Here’s Alessio talking about his tattoo and his love for history (via Fighters Only Magazine): “SPQR I have on my body! But its important to give the best fight for the fans, Italian or elsewhere in the world. I try always to improve my technique to give my best for the fans,” he told Fighters Only today.”

He adds: “It is because my name Sakara is an old name in the Roman Empire, in the south. For this I put the nickname Legionarus, which means a soldier in the Roman Empire. I am a soldier for Rome now – I fight around the world, I fight for Rome and for Italy. I like Roman history very much, and Greek history. I read a lot of books. [My favourite period] varies a lot. I like Julius Caesar and Marcus Aurelius. Everything in Rome, every period is good for me. I like the Spartan culture too, very much. I like Leonidas.”

Isn’t it refreshing to see an MMA fighter well versed in his country’s history? 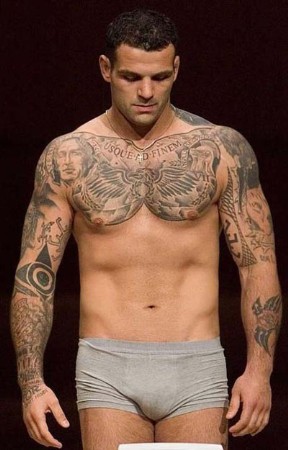 Here’s a hairier version of Alessio. If not for his tattoo, we’d say he’s not the same person. Which version of Sakara do you prefer, the clean-shaven one or the bearded one? 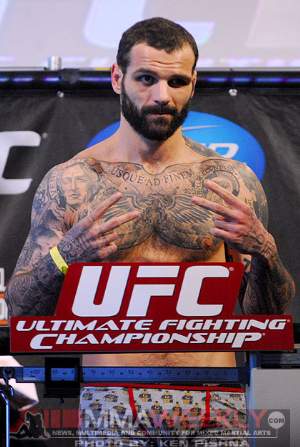 Here are some questions that some of you are asking through Google:

What is Alessio Sakara’s fight record? If you mean his win-loss record, he currently has 15 wins and eight losses as an MMA fighter. Before he became an MMA fighter, Alessio was a professional boxer with an impressive record of 8 wins and only one loss.

Alessio Sakara girlfriend? No Alessio does not have a girlfriend. But he has a wife and they have two kids named named Leonidas and Marcus Valerian.

For more MMA fighters in their underwear, check out Charles Dera’s tight undies, his white thermal longjohns, and Georges St Pierre in his Under Armour briefs.