Alessandra Ambrosio Ear-Pinning Surgery. We mentioned in our earlier post below that Alessandra had her ear pinned. However, what we did not know back then is that her doctor apparently botched the procedure. The Brazilian supermodel tell us more about what she underwent.

“I always knew I wanted to be a model so I decided to have my ears pinned back, because they stuck out a bit. I found this doctor in my hometown in Brazil who had only done it once before, so I was a guinea pig,” the Brazilian beauty told Net-A-Porter’s The Edit. “The first few nights, it felt like someone had cut off my ears. For a year, I had to go back for mini-surgeries.”

The experience was so bad that now, Ambrosio, 32, won’t have another procedure, even to fix the botched one. “Doctors say they can fix them, but cosmetic surgery freaks me out now,” she added.

Kinda Alessandra Ambrosio ear-pinning surgery before and after photos: 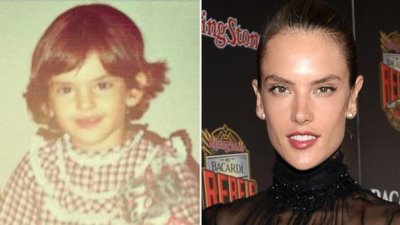 Alessandra Ambrosio: Brazilian Supermodel (8 May 2009). We’ve already blogged about Brazilian model Alessandra Ambrosio and her Biofit bra [see below] but there’s nothing wrong about blogging about her again, right? Right. Okay, so here’s some more photos of Alessandra modeling swimwear bikinis in time for the coming summer months when girls hit the beach.

If you are like our friend Deena, you’d be imagining yourself fitting into Alessandra’s swimsuit and looking as fabulous and as sexy as the Brazilian model. We’ve got a message for you girlfriend, don’t be disappointed if it ain’t gonna happen or if the figure you see in the mirror is not as sexy as Ms. Ambrosio. There’s a reason why she’s a Supermodel while most of us do other things to make a living. She’s 5 ft 10 in (1.78 m) tall, she’s from Brazil where models are born every minute, she’s voted by men (askmen.com) as the second most desirable woman of 2008, and,most importantly, she won the genetic lottery for gorgeousness.

We are not saying you can’t be beautiful or sexy or gorgeous or desirable at all. What we’re saying is that we should stop comparing ourselves to Supermodels.

[Update: Sorry we had to delete Alessandra’s photos.]

Brazilian model Alessandra Ambrosio is going to be in the new Victoria’s Secret swimsuit campaign. Good for you Alessandra. You are beyond hot. More photos of this gorgeous model after the jump.

Your most googled questions about Alessandra Ambrosio (Updated on 16 June 2011):

Alessandra Ambrosio ear-pinning surgery: Has the supermodel ever had plastic surgery? The answer might surprise you because yes she has undergone cosmetic surgery to improve her looks. Apparently, she was insecure about her large ears (maybe its as big as an elephant’s?) and, according to wikipedia, had a surgical procedure to get her ears pinned back. This brought about several complications so she decided to never have plastic surgeries again. [We have an updated info on the Alessandra Ambrosio ear-pinning surgery in the beginning of this post.]

How much money did Alessandra Ambrosio earn as a Supermodel: We don’t have the numbers for her total life-earnings but in the past few years, she’s consistently listed by Forbes Magazine as one of the too female models. She’s ranked number 5 in 2010-11 and she reportedly earned $5 million over the past year alone. That’s a lot of moolah, isn’t it? Not bad for a girl who was insecure about her elephantine ears.