We will update this post when he wins. Meantime, here’s a presscon interview with Alberto before the stage 21 final race: 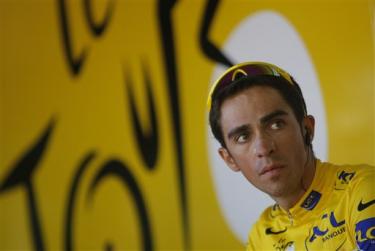 Question: Can you describe your Tour?
Alberto Contador: It’s been a hard Tour. I knew before coming that I had I be prepared both mentally and physically. Every day was one day less. Every day there was a certain amount tension and now I can think the victory and forget about all the other stuff.

Q: What are your immediate impressions?
AC: I feel very happy. I have worked so hard, thinking only about the Tour, trying to do everything perfectly for the Tour. Now to be able to finally win the Tour, knowing that everyone was betting on me as the maximum favorite, of course, I am very satisfied.

Q: Was this year’s Tour more mentally or physically difficult?
AC: Physically, of course. I had to have the legs to be able to respond on the road. The mental played a big role as well, but physically, a little bit more percentage wise.

Q: Was the 2007 Tour or this year’s Tour harder?
AC: Both were very difficult, as you say, 2007 was very close (21 seconds ahead of Cadel Evans) it all came down to the last time trial. This time, I had a little more margin of victory. This has been a combination of both physical and mental, whereas in 2007, it was more physical. I cannot say which cost me more of the two victories.

Q: What are you going to do in 2010?
AC: What I have clear is that there is going to be a lot of hassle to see what will be my future. For sure, it will be on a different team than Lance (Armstrong). We’ll see what we can do, whether it’s a new team or find a team that is 100 percent behind me to confront this race to win it again.

Q: Was it good or bad with Lance Armstrong?
AC: There haven’t been that many situations during the Tour. When the balance in his favor, then it was in my favor, it was good. The situation was more or less equal throughout the Tour. I knew that he would be a rider to beat in the GC. If I wanted to win, he wanted to win, it’s not compatible if two riders try to win. I knew that he would be a rival. I had trained a lot thinking about how hard this Tour was going to be. I arrived in this Tour in the best possible condition that I could be in and I didn’t really worry about what kind of condition that Lance was in.

Q: Will Lance be a challenger next year?
AC: Of course, next year he’ll have another important role to play like he did last year. He’ll be one of the clear candidates for the overall and he will be a tough rival.

Q: What will it be like with Lance on the podium?
AC: When you win, you like that the ones who are behind you, that they are good riders with a big name, so I’m sure that the photo we take tomorrow in Paris will be historic.”

Q: What are your thoughts on records and the Classics?
AC: I don’t worry too much about that. I’m 26 and the victories keep coming. I don’t set a goal with any specific number of victories. The Tour will remain my objective principal during the years, but that doesn’t mean that I will not race other events during the season.

Q: The Tour didn’t have any doping scandal. Is cycling cleaner?
AC: I am very content for all this. That’s what we’re all working for. The mentality of the riders has completely changed. Now we’re seeing the fruit of these anti-doping efforts. We’re seeing it now in this Tour de France and I also believe that this is also a great victory. 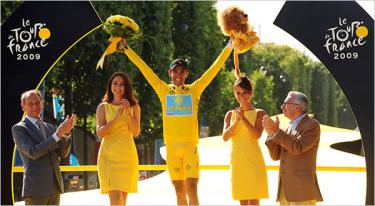