After Pregnancy Weight Loss Tips and Celebrity Programs. How did your favorite celebrity moms recover their weight after giving birth? What workout routine did they follow? Did they have a diet program which helped them loss weight but didn’t sacrifice their health as well as their baby’s? Well, here’s the after pregnancy weight loss workout and diet program of seven famous celebrities. Let’s start with:

I’ve never really had any special girdle machines or anything like that. For me, it’s, you know, really healthy foods, exercising, playing with the children, going to the park. Normal things. 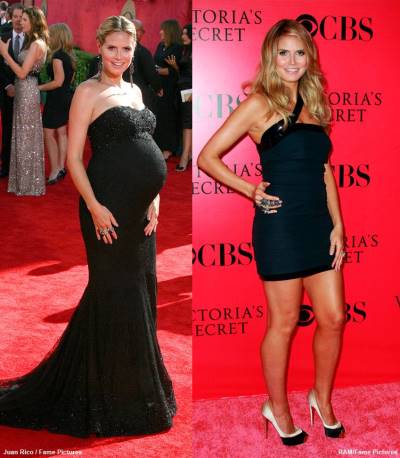 When she gave birth to son Henry in 2005, Heidi did have a trainer who helped her get in shape fast as she walked the Victoria’s Secret runway two months later. Says her trainer David Kirsch:

Heidi knew what she wanted to accomplish. She was going to be in a bra and panties in front of millions of people!

Heidi is pear-shaped, so we really zoned in on those areas using low weights and lots of repetitions, doing moves like lunges, squats, and exercises with stability balls.

As for her diet, she followed the Kirsch The Ultimate New York Diet, “which calls for cutting out alcohol, white bread and other starchy carbs, coffee, dairy (though it’s important for new moms to take calcium supplements), certain fruits, and unhealthy saturated and trans fats”.

So what did she eat if she avoided the things mentioned above? Low-starch veggies like broccoli and cauliflower, salmon, chicken, nuts, mushrooms, egg whites, beans and lentils, and berries.

Beyonce: What’s Beyonce’s after pregnancy weight loss secret? Here’s what she told her fans when she performed in Atlantic City on Memorial Day 2012: “Y’all have no idea how hard I worked. I had to lose 60 pounds. They had me on that treadmill. I ate lettuce!” 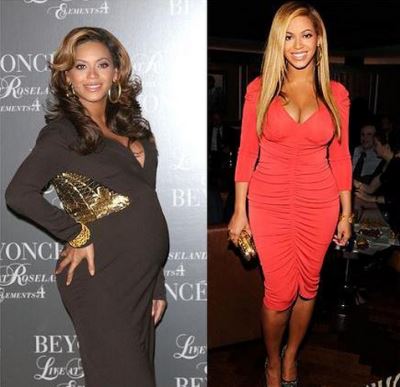 That’s it? She lost weight by simply working out on the treadmill and eating lettuce? Nah, she did more than that. She says in an interview with People Magazine: “I did a lot of walking in the beginning and now I’m running. But I had to work my way up. I couldn’t just go right from being pregnant to running.”

Christina Aguilera: An “insider” who talked to eonline.com has some info on how the The Voice judge’s after pregnancy weight loss yoga workout after she gave birth to baby Summer Rain:

Christina was very healthy throughout her pregnancy and is continuing it now after the baby. She is very dedicated to yoga. So much that she has never stopped practicing it. She did yoga the entire time she was pregnant. And Christina has already been working hard on getting her bod back in shape! She is doing private yoga sessions and loves how it makes her feel. 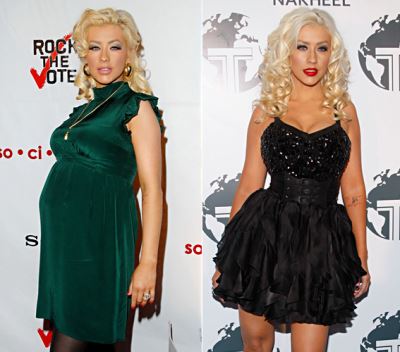 Everything is about moderation. She will have cheat meals occasionally too. Running after Max also is helping her burn some extra calories. There’s never a quiet moment, Max is very active!

Angelina Jolie: babyoye.com has the details on how Dame Angie’s after pregnancy weight loss diet: 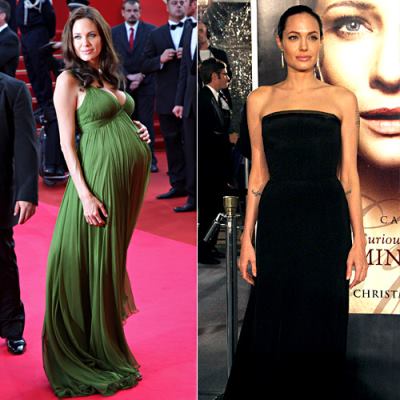 Jolie is one of those fortunate women who is genetically slim and hence doesn’t have to worry too much about staying in shape. The actress confesses to have over-dosed on protein-rich cheese and milk during her pregnancy, but apart from that, she stuck to fresh fruits and vegetables, fish, tea, and low carb foods. She was also breast-feeding, which helped her shed all that unwanted weight. After her last baby, she ate healthy, sticking to soups for lunch.

By way of exercise, Jolie continued practising yoga, that worked wonders for her.

Gwen Stefani: Lucille Roberts has the info on how the current female judge on The Voice gets rid of her after-pregnancy weight: 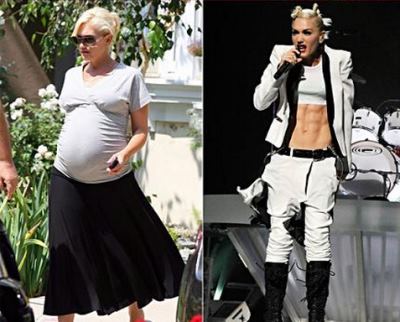 She stays focused by working out, eating healthy, and has said that she “cheats every day at least once.” As far as an exercise routine, Gwen told instyle.com, “I’ve tried yoga and Pilates before, but I just prefer old-school fitness workouts.” She works out with her personal trainer four times a week, who has her doing high-intensity resistance sessions – a series of simple exercises that are much more difficult when the rest periods are eliminated between sets.

Jennifer Lopez: According to parents.com, Jennifer took it easy in the first 4-5 months after pregnancy by doing some light-walking workouts. But then she decided to go somewhat hardcore by training for a triathlon which she was able to complete seven months after giving birth. More from parents.com:

Lopez’s workouts, anywhere from 45 minutes to two hours a day, four to six days a week, with longtime trainer Gunnar Peterson, were intense. “But it’s not like she dropped everything,” says Peterson, author of The Workout. “She was very hands-on with the babies and needed to fit this in around them.” He had J. Lo train for the specific events of the triathlon with some basic strength sessions in between, including moves like squats and lunges to tone her famous derriere. “The important thing is to keep mixing it up, so your body has to adapt — and that’s when the results happen.” Running was Lopez’s strong suit and swimming her weakest, according to Peterson.

She did not follow a specific diet plan but ate healthfully sticking to healthy whole grains, like brown rice and protein from egg whites and lean cuts of chicken, turkey, and beef. 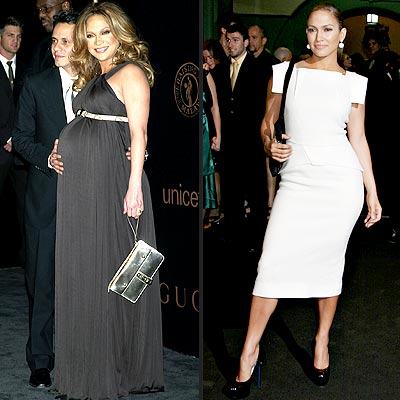 Jessica Alba: Here’s what Jessica says about her workout routine during her pregnancy and after she gave birth (via US Weekly):

I did prenatal yoga up until the very end,” she said in an interview with US Weekly, “I just made healthier choices. I started working out and not going too crazy, but I did what was safe and what the doctor approved. 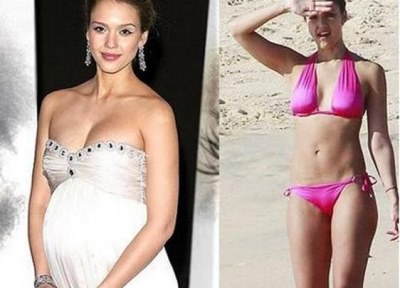 After she gave birth, Jessica embarked on her after pregnancy weight loss program by working out with the help of her trainer Ramona Braganza who had the actress do 20-minute workouts that strengthened core muscles. She eventually went up to 40-minute workout sessions which “included longer bouts of fat-burning cardio (like kickboxing and dance aerobics) and strength training with light dumbbells (chest presses, triceps extensions, and squats, lunges, and jumps)”.

As for her diet, Braganza had her eat three meals and two snacks and at least one liter of water a day.

That’s it for now fellow Celebrity WeightWatchers. We hope you were able to gain some ideas on how to go about your after pregnancy weight loss plan.