Adrian Zielinski Shirtless Polish Olympic Gold Medalist. Want more Polish hunks? Meet Andrian Zielinski, the Polish weightlifter who won a gold medal for Poland in the London 2012 Olympic Games. Says Adrian of his victory: “It is the fulfilment of my dreams to have this medal. I was sure I was going to get a medal. But in the last lift I felt a second strength so I just decided to go for it.” 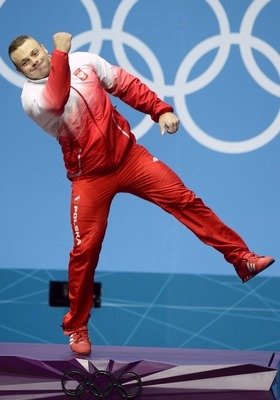 Does Adrian Zielinksi have a girlfriend? Good question! A Polish website, polityka.pl, has an article which mentions that our manly Polish hottie has a girlfriend named Magda but we are not sure if they are still “on”. The article was published in 2010. Anyhoo, here’s a photo of Adrian and Magda [via polityka.pl]. 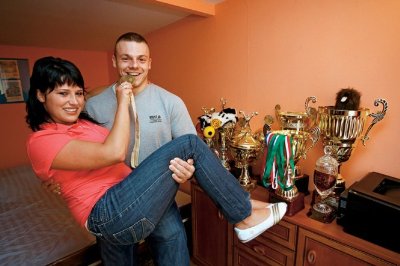 Looks like a happy couple. Okay, can our Polish Famewatchers tell us whether these two are still in a relationship? Inquiring minds would like to know. Haha. Anyhoo, here’s Adrian in his element as a world-class, gold-winning weightlifter. 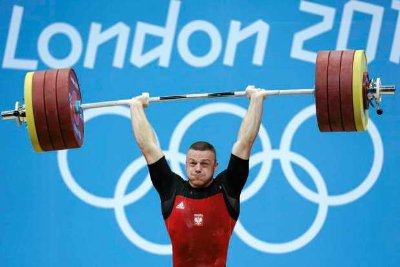 That’s a lot of weight, eh? Impressive. Here’s Adrian at the medal podium with his fellow medalists — Apti Aukhadov of Russia (who won the silver) and Kianoush Rostami of Iran (who settled for the bronze). Adrian (or more appropriately the one who designed the Polish Olympic uniform) deserves another gold medal for his badass uniform which somehow reminds us of Katniss “The Girl on Fire” Everdeen of The Hunger Games. There’s a resemblance, right? 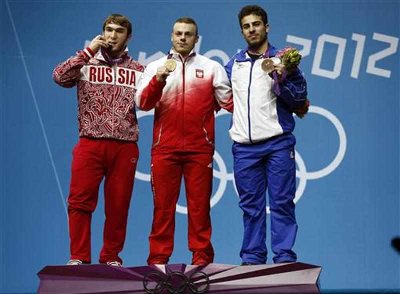 Anyhoo, aside from his Olympic gold medal, Adrian also won another gold medal at the 2010 World Championships in Antalya Turkey. His goal now should be to break the Olympic and world records for his event. Right, Adrian? You can do it too!

Now those of you who are looking for shirtless photos of our Polish hunk will be happy to find out that it’s not just a shirtless pic we have of the 23-year-old champion. It’s a shirtless Speedo photo! Yay! Yay! Yay! We grabbed it from his Facebook page.

The other guy is Arsen Kasabijew, another Polish weightlifter who competed in the 94kg category but did not finish due to injury. We wish you good luck at the 2016 Rio de Janeiro Olympic Games, Arsen!

Adrian looks pretty good whether he’s wearing a weightlifter’s Spandex unitard or a wet swimsuit or a business suit. Check him out receiving his “Discovery of the Year Award” following his World Championships victory in 2010. 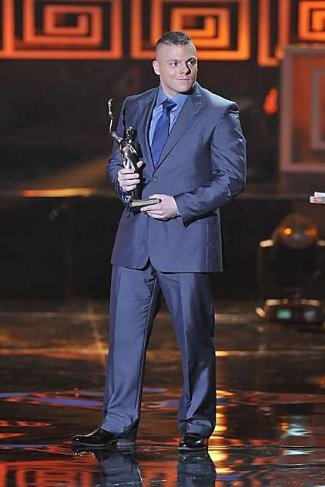 Aww. What a hottie!