Okay, so maybe the answer is “Yes”. Big deal. So what? It’s not the end of civilization if he is gay and we certainly hope it won’t be the end of his American Idol dream. 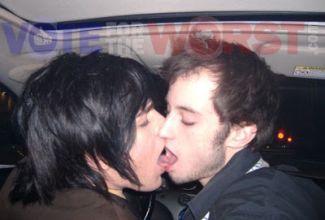 Anyways, now that the cat is out of the bag, we hope that you, Adam, carry the banner for the gays in American Idol in the same manner that Spencer Duhm is doing it in Survivor Tocantins who is upfront about it. In other words, don’t be the next Clay Aiken who denied his gayness because he thought he won’t be embraced by the Idol audience because of his sexuality. However, by hiding himself Clay reinforced the stupid idea that it is wrong and shameful to be gay.

So, go Adam. Good luck on your Idol journey. And kiss anyone you want.

EARLIER POSTS ON THIS SUBJECT:

Adam Lambert: Is He Gay or Is He a Good Actor?

OMG. This video of American Idol wannabe Adam Lambert is so gay and so LOL funny. Make sure you watch until the very end because the best part (i.e., crotch grabbing) is there.

Aww, he’s too cute to be straight, eh? Adam’s version of Dust in the Wind.

Hello, fellow Adam Lambert fans? Are you in the mood to spank someone? Why don’t we go spank them editors of the Boston Phoenix for including our Adam in their list of Top 100 Unsexiest Men of the Year. We must admit that we agree with practically all the other men they picked (Eric Cantor, Dubya, David Patterson, Robert Mugabe, John McCain, etc. etc). But our Adam Lambert is unsexy? No way! Them editors are either out of their minds. Or maybe they’re just jealous of Adam. Hehe.

Here’s what they said of our American Idol:

We’re not sure exactly what is driving teenage girls — and Paula Abdul — to make this Broadway-hack, balls-in-a-vice belter the early favorite for this season’s American Idol. The drag-queen pout? The pancake makeup? The worst haircut since Clay Aiken? Any of those traits would be enough to land him a spot on our list. But what puts it over the top is that ginormous whale tongue that flops out of his mouth every time he screeches one of his eyes-clenched, paint-peeling high notes. If this is the future of pop, we’re going country.

Anyways, as we were saying, these editors need some spanking and some tongue lashing for their senseless Adam-bashing. Go spank them.