Actress Plastic Surgery List. Who of your favorite Hollywood stars underwent some cosmetic surgery procedure to improve their looks? We are tempted to say that all of them had plastic surgeries but there are natural beauties out there, right? Anyhoo, we made an actress plastic surgery list for you to check out. Let us begin the list with:

Julia Roberts. Did Julia Roberts, admittedly one of Hollywood’s most beautiful ladies, ever undergo plastic surgery? Apparently, as you can see in the above photos, she might have gotten herself a nose job or, if you wanna go technical, rhinoplasty. Want more celebrity plastic surgery? 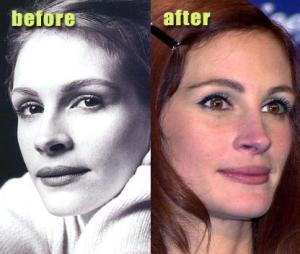 It just goes to show that Hollywood stars, like the rest of us ordinary people, have insecurities about their looks too. In fact, we are going to bet our ten dollars that they are actually more insecure than us not because we look better than them but because their very livelihood depends on their looks. 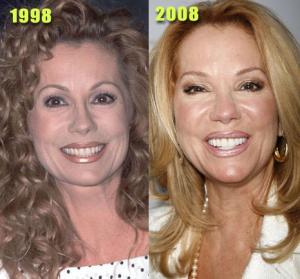 Did she find the secret path to the hidden fountain of youth? For she sure looks the same after ten long years. To use the words of the popular TMZ online poll, do you think she’s got good genes or does she have a good doc?

We’re gonna vote, “Good doc” mainly because everyone, no matter how good there genes, are gonna add facial wrinkles in ten years.

Meg Ryan Cosmetic Surgery. What has America’s Sweetheart Meg Ryan been doing to herself? She used to be a natural beauty but her cosmetic surgery adventures (lip injections? lip implants?) is making her look unnatural and kind of creepy.

Granted she’s not as creepy as the Octomom aka Nadya Suleman or the CatLady but creepy is the last word we should be associating with Meg Ryan. Unfortunately, that’s the best way to describe Meg’s surgical lip enhancements. 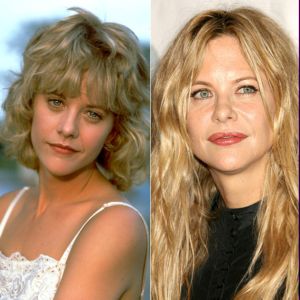 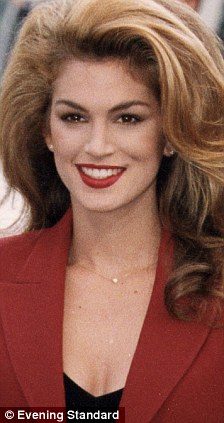 She admits that she used to think that plastic surgery is not good but she’s now open-minded about the matter.

“When I was 30 I might have said, “I’m going to age in a way that honors time and is completely natural”. But I’m no longer so highbrow about it.

I’ve tried Botox but it scares me. Plastic surgery is really scary, but as long as you don’t use these things to change your face, I think it’s okay.”

So don’t be surprised if you hear news of Cindy getting some face lift in the future. Not that she needs it; if the two photos below are for real (the top is taken in 1992 while the bottom photo was taken this year), the supermodel seems like she’s not growing old at all. 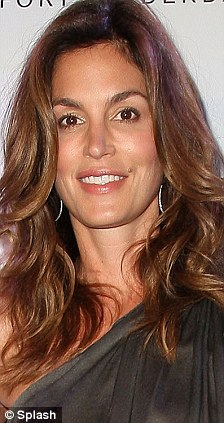 Jennifer Aniston. Anistonakis tops our actress plastic surgery list for the very obvious reason that she is a fan of going under the knife to enhance her looks. So far, her surgeries have succeeded to make her look pretty but age is surely catching up with her. 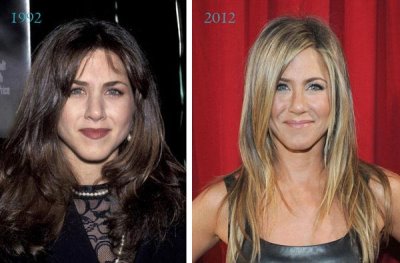 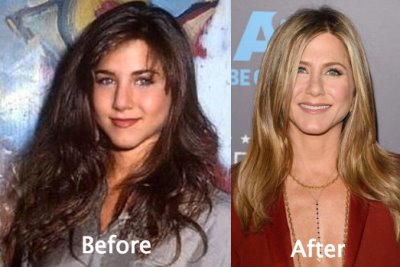